Will Farmers Adopt Diverse Management?
This is the question facing everyone:  How to convince farmers to embrace more complex weed management practices when they have been used to and dependent on the strength of herbicides like the glyphosate and the simple technologies such as Roundup Ready.  The work is easier to embrace in areas like Georgia because farmers there essentially have no choice.   However, in Iowa and Pennsylvania the goal of integrated practice is primarily to prevent future problems rather than deal with the current ones, thus, making it harder to sell integrated strategy.  Owen said “Truthfully, until growers get [herbicide-resistance] in their fields, the likelihood of them actually doing something about it is unfortunately not very high”.
According to Owen one thing could help weed scientists is more research into the economics of diversified approaches.  Farmers are more concerned that these practices will cost more time and money, while offering little benefits other than preventing a problem they may not actually face.  However, Owen and coworkers found, in a number of on-farm studies in six states for five years, an integrated system involving crop rotations and diverse mix of herbicides actually saved money, or at least didn’t cost farmers anything more than their standard practices.
Even so, change is difficult, that is why Owen thinks agronomists must collaborate with sociologists and psychologists to overcome human barriers.  Scientific facts are established “Now what do the social sciences say about getting growers to accept?”  Owen is also, working with a group from the Weed Science Society of America to develop a set of best practices-with a clear and simple language - that will hopefully bring more farmers to adopt such practices.
Mortensen suggests handling this issue from a totally different angle.  Emphasis should be focused on the benefits of diverse management.  Cover crops, for example, don’t just suppress weeds; they also reduce insect pressure, enhance soil tilth and soil organic matter, and stop nutrient and herbicide runoff. Yet, they still are mainly deployed to fix one environmental problem at a time; for instance, concerns over the steady decline of Chesapeake Bay recently led Maryland State to adopt a program that pays farmers to plant winter cover crops to curb nutrient runoff.
Consider taking the same program and listing all the benefits that cover crops provide as well as eliminating the negative effects that would help growers to adopt diversified approach.   And as long as research continues to focus on the benefits of the diverse system, there is hope that more farmers will embrace such a system.
Conclusion
As a long term management strategy, experts agree, that if farmers do not use nonchemical methods for weed control such as crop rotations, cover crops, and tillage. Then eventually, few individual weed biotypes will emerge resistant to 2, 4-D, dicamba, glufosinate, glyphosate, and to other new and old herbicides selected for their successful weed killing capacities. 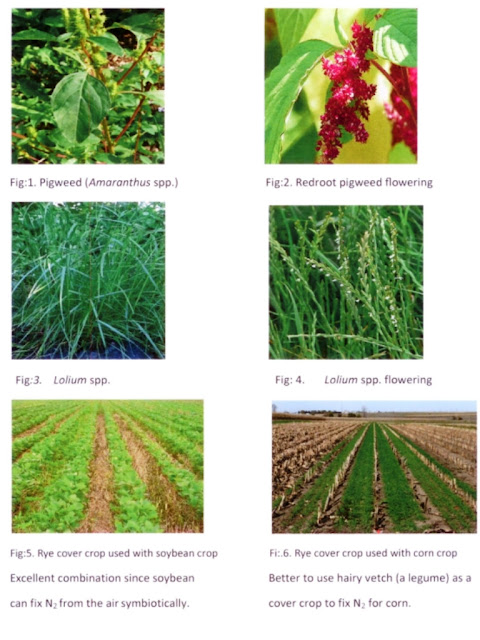