Talib Murad Elam
22.11.2013
I was working in Somalia during the last decade of Siad Barre’s regime and remained there until the American forces left in 1996. In 1988 I found myself in charge of an  FAO project to train Somali pastoralist nomads in primary animal healthcare and I had a close association with the trainees. The 40 trainees were from different areas of Somalia and were mixture of men and women. A second program followed to train village women to humanely castrate small ruminants (i.e. lambs and kids) so that the animals were accepted by the importers in the Gulf States. The women were supplied with a castration tool (burdizzo) free of charge allowing them to provide the service to fellow villagers and the pastoralists.

I became familiar with the social structure and way of life of the Somali and learned that the Somali pastoralists were not attached to any one area of land and they regarded the ‘Jerrar’ ( Kinky hair), a small group of indigenous farmers living along the banks of the Shabelee and Juba rivers of Somalia, as second class citizens. There were only pastoralist nomads in the north and middle of Somalia and the Jerrar frequently came to the FAO offices in Mogadishu during the war for handouts of crop seeds which they would plant. However they often lost the crop to the livestock of pastoralists who would release their animals onto the Jerrars’ fields and this naturally caused further tensions between the farmers and pastoralists and naturally the indigenous farmers were the losers. They also lost out on the wider scale with the IOM and UNHCR because although tens of thousands of Somalis reached western countries to receive and manipulate the benefit systems there the Jerrar are not among them.

North Somalia had been colonized by the British while the South had been under Italian rule and the Somalis did not fight for independence yet in the 1960s both north and south gained independence from the colonial powers within a short period of time.  Now, fifty years later, the country is divided into several distinct regions or states and its people are mainly nomadic pastoralists, united by language and religion, nevertheless this most homogenized nation in the world is also the most divided nation in the world. This has nothing to do with clans, districts or regions but lies in their way of living as nomadic pastoralists giving them no ties to the land itself while envying each other is normal in nomadic pastoralist communities all over the world.

Somalia’s neighbour, Kenya, is a nation of different tribes (not clans), some with different languages and distinct differences in appearance, who were united together in their country and the Somalia UN agencies and NGOs all had offices in Nairobi. The electricity supply in Somalia was, to say the least, erratic and expatriates facing another evening with no electricity would often spend their time discussing the day’s events and the nature of the Somali people. During such evenings the conclusion that was often made was that the Somalis were not tied to their land as other nations were because they moved across the land with their grazing animals and there was no strong link to any particular area. The bond of the Somali to their land is much weaker than the bond existing between members of the clan. I am not an anthropologist but I remember reading about the Mongolian hordes that repeatedly conquered most of Asia but failed to establish government or administration across the vast lands they had subjugated. The Mongolians, like the Somali, were pastoralist nomads and to me there are many similarities in the way in which both regarded the lands through which they moved.

Recently I have been thinking of the fate of the land of Kurdistan. Here the traditional way of life in the mountains is that of the nomadic pastoralists (kooch) who spend their winter in the valleys and move into the mountains with their flocks in the spring and summer. Many young kurdish intellectuals today blame Britain, Persia or the Ottomans for the lack of a Kurdish state yet perhaps there is a reason for it that is linked to our very nature. If we consider the Bedouin who struggle to keep livestock in their arid homelands and our traditional farmers/livestock owners whose flocks have good grazing in the fertile land then there is a different attitude to the land.

In Egypt farmers will shed blood over the rights to one Kierat of agriculture land (175 sqm) yet here in Kurdistan prime agricultural land is readily exchanged for dollars to buy a taxi, a kebab shop or anything else other than a farm. It seems that we do not have that strong a tie to the land our poets and singers praise and quite simply we could be said to exhibit the characteristics of an ancient group of nomadic pastoralists.  Most of the young Kurds of today wearing their city suits and driving  their Mercedes will argue and deny this theory but they are selling land, if own some, to the highest bidders yet a visit to the Ministry of Agriculture’s Land Department reveals the true relation between Kurds and the land. The excuse of most of them is that they cannot live on what the land can produce yet this is not true and they do not want to recognise that the bond between them and the land is feeble, it has not been acquired lately but it is an attitude that has been inherited down generations.

Every month more and more of Kurdistan’s agricultural land is sold off and lost to agriculture. It is taken for ‘industrial development’ that more often than not results in the land being divided into small plots for a villa and a well while much disappears under concrete and roads. Gradually Kurdistan’s seven plains, that for centuries supported livestock and produced grain, are slowly and irrevocably disappearing under concrete and the villas of the wealthy while the riches promised by oil beckon and we rush to embrace a new life with no care for the land itself and the inheritance of future generations.

The sensitive question of water usage on the Euphrates and Tigris dominates discussion between FM Davutoğlu and Iraqi Shiite spiritual leader Ali al-Sistani, with the latter regarding Ankara’s position with suspicion 11.11.2013
Turkey and Iraq should apply for U.N. arbitration to resolve a long-standing water problem, according to Ayatollah Ali al-Sistani, a spiritual leader for Shiites in Iraq and the wider region, as well as a major political force.

Al-Sistani made the suggestion yesterday at a meeting with Foreign Minister Ahmet Davutoğlu as part of the Turkish minister’s two-day trip to Iraq.

“Al-Sistani complained about Turkey’s cutting of the flow of water into Iraq and Turkey’s construction of dams on these rivers,” a source familiar with the talks told the Hürriyet Daily News.

The rivers in question, the Euphrates and Tigris, both begin in Turkey and pass through Syria and Iraq before emptying into the Persian Gulf in Basra. Al-Sistani said Iraqis were suffering from water shortages and that the issue should be resolved through bilateral mechanisms and, if subsequently necessary, through U.N. arbitration.

Davutoğlu explained Turkey’s position with regard to water allowance to neighboring countries, but al-Sistani was unconvinced, according to the source. Davutoğlu earlier said he would not discuss political issues with al-Sistani but most of their conversation reportedly focused on political issues. The two men also discussed ways to avoid a sectarian clash between Sunnis and Shiites in the Middle East. 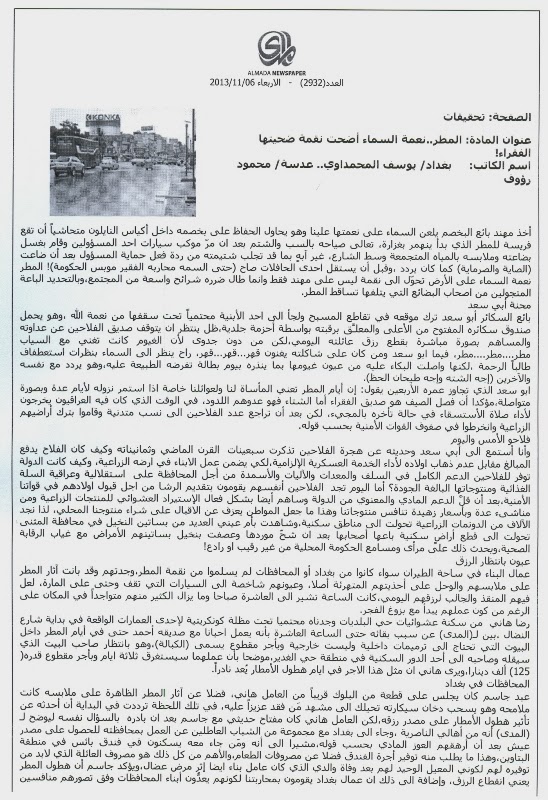 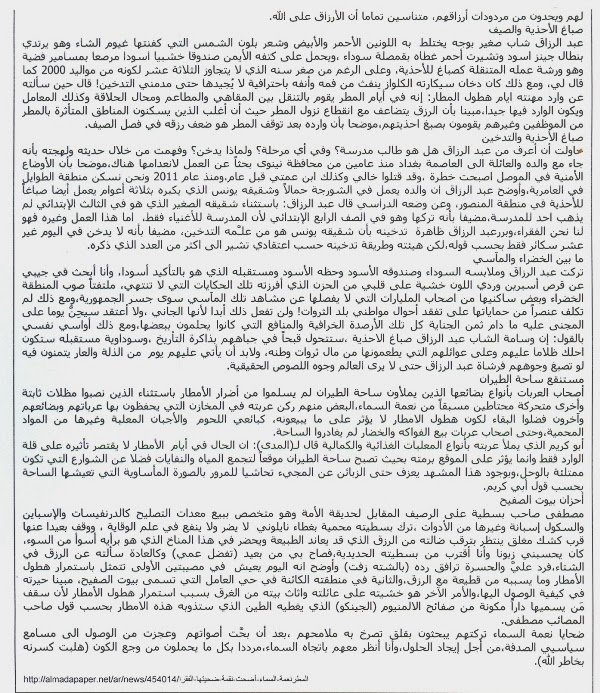