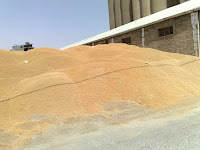 Quantities of grain bought in the KRG silos:

The subsidized prices paid to the suppliers for a ton of grain reaching the silos were:

For Iraq as a whole, including the KRG, the quantity of wheat reaching the silos for 2011 was 1,735,000 Tons of wheat and 152,547 Tons of barley with a reduction of 139,000 Tons of wheat and 285,000 Tons of barley compared to the 2010 quantities sold to the silos. Iraq requires 4.5 million tons of wheat to fulfill the quantities needed for the Government Ration. Surprisingly the governorates of Baghdad, Anbar and Dialah sold 313,219 Tons of wheat to the silos this year, an increase of 76,079 Tons over the 237,124 tons of wheat that these three governorates delivered last year. This does not fit with the drought situation in the country. Probably it has something to do with the hefty subsidized price the traders are getting for their grain at the silos. There are hints and rumors that large quantities of grain have been moved across the borders from neighboring countries, just days before the silos started to receive the grain, thereby taking advantage of the subsidies offered in Iraq.

In KRG the monthly requirement to meet the government ration of wheat to make flour is 53,000 tons of wheat, 40% of that wheat was sourced locally and 60% was imported wheat. There are no precise figures for the amount of wheat required for commercial purposes and imported by traders throughout Iraq including Kurdistan.

The following has to be mentioned at this junction:
• It has been proved in Kurdistan that the yield of barley grown under an irrigation system this year was 10 times more than the yield from the rainfed system.
• Subsidizing grain production at the silos sites has a negative effect on the production of grain but the business of ‘fiddling the system’ thrives as traders take advantage of it. Providing help to the farmers early in the season and at all stages of production is more appropriate and advantageous.
• Departing from the old system of rain fed agriculture will help the sector tremendously.
• A review of wheat varieties grown in Kurdistan is long overdue. Extension programmes are needed to persuade farmers to change farming methods and offer financial incentives to the best producers.
• Grain coming across the borders must be traced to ensure that it does not end up in the silos. Today, 14th August 2011, the price of a ton of wheat is 318 US$ internationally and in Iraq we pay 720,000 ID per ton. This huge difference in cost, resulting from subsidies for wheat at the silo, should be used to encourage the farmers to grow the crops, farmers can be awarded support during the production system thereby encouraging increases in cultivation, utilization of new techniques etc and ensuring that the money does not go to traders, importing grain from unknown sources, and presenting it at the silos to take advantage of the subsidy and increase their profits.
Posted by Talib Elam at Monday, August 15, 2011