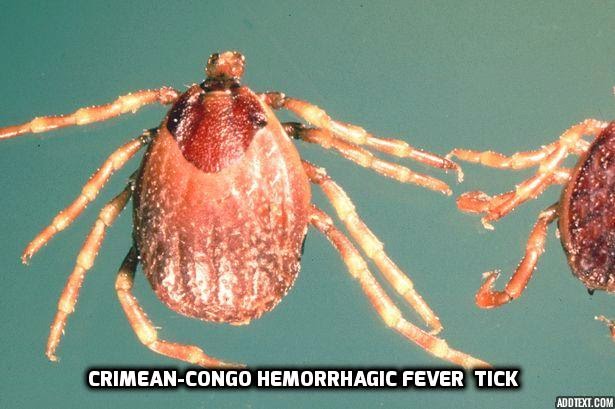 Crimean-Congo hemorrhagic fever (CCHF) was confirmed in 2
under-treatment patients in Civil Hospital Karachi [Sindh province],
it was learnt on Wednesday [14 Jan 2015].
An official of Civil Hospital Karachi confirmed that 2 patients with
high-grade fever were brought in the general ward of hospital for
treatment about a week ago and their blood samples were sent to the
National Institute of Health (NIH), Islamabad.
He said the NIH report confirmed that both the patients, 60-year-old
men, were suffering from Congo fever [CCHF]. He said one of them was
isolated from the other patient, while the 2nd person was discharged
from the hospital even before confirmation report was received to the
hospital administration as his condition had improved.
He said Congo [CCHF] is a deadly viral disease spread through a
tick-bite found on animals. He said people who deal with dairy farming
and livestock were most likely to catch the disease. He said symptoms
of [Crimean-] Congo viruMedical Superintendent, Prof Saeed Qureshi, when contacted, said
[Crimean-] Congo fever was confirmed in 2 male admitted patients on
[13 Jan 2015] evening and a patient isolated from other patients. He,
however, said that the hospital administration contacted with a
patient who was discharged from healthcare, but he refused to return
back and said: "he is better now".s [infections] were high-fever, dizziness,
neck pain, backache, muscle aches, sore eyes, nausea, and vomiting and
stomach pain. He said these symptoms of disease generally appear 3-4
days after exposure to ticks.
He said panic was spreading among admitted patients, doctors, nurses
and paramedical staff after hearing the news that 2 Congo [CCHF]
patients remained with them in the general ward. He said patients with
dengue, [Crimean-] Congo and other hemorrhagic fevers must be kept in
the isolation ward as these viral diseases can transform [sic;
transmit] into other patients if strict protective step are not
taken.
MORE INFORMATION
[Sporadic cases of Crimean-Congo hemorrhagic fever (CCHF) occurred in
various parts of Pakistan last year (2014). Last year, 17 cases of
CCHF were reported in the country, with 9 of them in Sindh province.
Circumstances under which the 2 patients acquired their CCHF virus
infections is not stated in the above report. They probably acquired
the infection via a tick bite or exposure to the blood of an infected
animal. The virus can cause severe viral hemorrhagic fever outbreaks,
with a case fatality rate of 10-40 per cent. The virus is transmitted
by _Hyalomma_ spp ticks or through contact with infected human blood
or animal blood and tissues during and immediately after slaughter.
The majority of cases have occurred in people involved in the
livestock industry, such as agricultural workers, slaughterhouse
workers, and veterinarians. Exposure in health care facilities can
occur also. The length of the incubation period depends on the mode of
acquisition of the virus. Following infection by a tick bite, the
incubation period is usually 1-3 days, with a maximum of 9 days.
CCHF virus is a tickborne virus in the genus _Nairovirus_, family
_Bunyaviridae