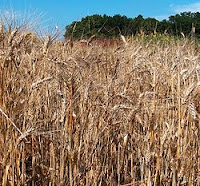 By Salah al-Rubaai
Azzaman, June 27, 2012
Iraqi farmers have shipped 1.5 million tons of wheat and barley to state silos but the yields, though record high, only meet a small portion of domestic demand.


Trade Ministry spokesperson Amer Adbulaziz gave the details of this year’s harvest, saying that the southern province of Wasit alone contributed nearly one third of the yields.

“Wasit is the only province in Iraq which could feed itself producing 420,000 tons of wheat only, that is 240,00 tons more than its needs,” said Adbulaziz.

Iraq’s grain needs are currently estimated at more than 4 million tons and the country makes up for the shortage via imports.
The harvest could have been much higher but the country’s grain belt to the west of the northern city of Mosul did not have enough rain this year for the cultivating of barley and wheat.

The Mosul plateau is known as Iraq’s basket but the area is turning dry amid warmer climate that has seen rainfall rates falling drastically in the past few years.

Iraq relies on imports for its most food needs. Its food import bill costs the treasury billions of dollars every year.


THE SITE
The Government is paying 720,000 ID for a tonne of first class wheat reaching the silos. The International price of a tonne of hard wheat is about 290 US$.
Posted by Talib Elam at Thursday, June 28, 2012