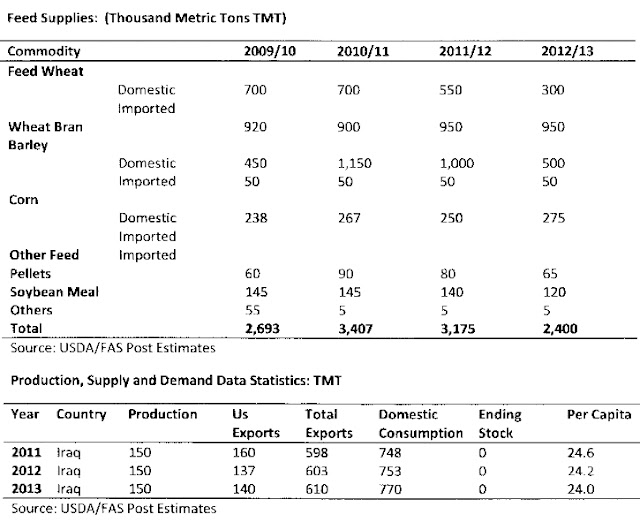 Email ThisBlogThis!Share to TwitterShare to FacebookShare to Pinterest
Labels:photos PUBLICATION


50 farmers in the Sulaymaniyah province were randomly selected from the 10 best farmers who had been selected by each of 13 AI officers from 12 veterinary centers covering 39 villages and the surrounding farms.


The farmers were asked questions about;
Their knowledge of cattle husbandry, their animals e.g breeding, record keeping, feeds used, milk yield, housing in cow pen or barn, their use of the extension system etc.
1:    The farmers and their animals


·      58% of participants have another job, farming is their second career.
·      48% of farmers receive salary form the government or from a political party. This has a negative effect on farmers who then do not care about farming.
·      All participants have a total of 757 animals giving an average of 15.4 cows/farmer.  These animals are from a variety of breeds, namely 15.19% local breeds , cross breed 57.86%, Simmental 10.17%, Brown Swiss 5.54%, and Holstein 10.96%. This is indicative of active smuggling because Simmental, Brown Swiss, and pure Holstein cows are imported illegally, and farmers prefer rearing high productive cattle. As more than half of the cows are cross breeds, it indicates efficiency of AI.
·      Although 57.86 of animals are cross breeds produced by AI, most of farmers do not have any information about what is a Filial generation. In total there are only 2 F4 calves, 3 F3 animals and 11 F2 calves which does not reflect 42 years of AI activity in Sulaiymaniyah. This caused by a lack of cow pedigree recording, and identification and traceability of individual animals.
·      The reason for cattle breeding in the first place is dairy farming and reproduction with Simmental cows being used for dairy farming.
·      Participating farmers had conducted AI over 3 to 42years.
·      Reasons for not obtaining F4 or F6 generations were: the selling of calves as beef animals by 26 farmers, abortion on 2 farms, 1 farm was unsuitable, the cost of keeping calves on 1 farm, cattle ruining the village was the reason given at 1farm and calves viewed as undesirable  by1 farmer.
·      86% of farmers prefer a private sector AI service because they work after official time and on holidays. 12% used both private and public AI services while 2% used natural insemination.
·      Only one of the participants was not satisfied with AI officers because his cows had aborted.
·      60% of participant farmers prefer private sector for animal treatment because the government sector has a lack of medicines, the low level of experience of personnel and limited official time.
22% of those questioned used the government sector and the remaining18% had no preference.


2.     Feeding methods used
·      42% do not feed cows with clover, 36% feed clover while 20% sometimes feed clover to their animals Clover is a strategic and necessary feed for cattle and failure to meet the animals’ nutritional needs is another reason of low production and diseases, particularly diseases of the reproduction system.
·      None of the farmers measure the amount of clover that the cows are fed with.
·      88% percent of the farmers surveyed do not feed the cows with corn while 4% feed it sometimes and 8% utilize this feed. This is another reason of low productivity and diseases particularly reproductive disease.
·      None of the farmers who use corn measure the amount of corn that the cows are fed.
·      The best cow feed according to the experience of participating farmers was; clover, 25 farmers, 11farmers preferred to use black barley, 10 farmers used corn, 1 used mixed feed, while 8 farmers used a readily available cattle feed. This indicates that only 18% of farmers know the perfect cow feed.
·      66% of farmers do not feed cows with dried grass or clover during winter and summer. 4% of farmers sometimes feed them with dried grass and only 30% do use this as a daily feed. That is another reason of low product and diseases particularly reproductive disease.
·      None of the farmers that use dried grass measure the amount of grass that the cows are fed with.
·      42% do not add salt to the cows feed, 4% sometimes do so while the remaining 48% add salt in the feed. Although salt is cheap, the only reason that most of the farmers do not add it is a lack of extension and only 2% of farmers use the correct salt to feed ratio. Meanwhile 98% do not know the correct ratio.
·      32% of farmers do add vitamins in the feed, 4% sometimes, and 42% do not add vitamins at all.
·       Only 4% of farmers  use the correct ratio of vitamins, the remaining 96% add incorrect amounts. That is another reason of low production and diseases, particularly reproductive disease, and also gives negative effects on AI performance.
·      Only 28% offer feed to new born calves at the correct time at age of 7-15days, 28% of them feed at one month, 22% of them feed them at 2 months, 12% feed at 3months, finally 6% of them feed at 4 months.


·      4% of the participating farmers have the legal license for a dairy farm project, 45% don’t have, 6% of them are in progress of obtaining a license.
·      68% of the farmers close the windows in cold weather,16% of them do not while the remaining 16% close them partway.
·      26% of the farmers have stocks for individual cows, 74% of them do not. Both individual stocks and mass pens are necessary for vaccination, blood collecting, etc. procedures to be carried out.
·      40% of the cows live in an indoor system, 60% of them in an outdoor facility or are free to roam. Keeping cows in closed places with imbalanced feed causes nutritional deficiencies, reproductive disorders, pica, madness etc.
·      64% of farmers have not numbered/tagged their cows, 32% of them have numbered some of their animals.
·      50% of farmers beat their cows by sticks. While the others do not. Physical punishment causes low milk production and makes animals nervous and harder to handle.
·      2% of farmers have data record notebooks for AI, while 100% have no cow data records at all. Recording cow data is necessary for recording issues and breeding results.


·      48% of farmers have known that an extension office exists as a part of the agriculture office while 52% of them have no knowledge of this.
·      35 farmers ask AI officers for extension, 29 have asked veterinarians while 8 have asked expert friends. No one asked extension office for extensions.
·      Only 6% of farmers have participated in an extension course within the last 10 years.
·      90% of farmers have yet to visit an extension office while 10% have done so.
·      98% of farmers do not have a telephone number for an extension office phone.
·      32% of farmers have personal computer in their house, the remaining 78% do not
·      Only 8% can use a computer.
·      16% of them have internet in their houses but only 8% of the farmers can use it.
·      The extension system contacts farmers by: phone 2%, visiting the farm 4%, through the rural council 14% while the remaining 82% have not been contacted at all.
·      Source of farming information; 100% traditional,10% from experienced people, 18% from TV, 2% from newspapers, and 2% the web.
·      46% of farmers stop milking pregnant cows prior to delivery, while 54% of them do not.
·      36% of farmers stop milking pregnant animals from 40-60 days before calving. The correct time to stop milking the pregnant cow is 60 days before calving.
·      The only used method among the farmers for drying/stopping a cow producing milk is to milk her less frequently each day, or milking the cow every other day. The correct method is to change her feed and reduce her drinking water.


6.     Miscellaneous
·      30% of farmers benefit from MOA facilities but do not consider vaccination, AI services, treatments and extension services as facilities.
·       4% benefited from loans, 6% received pick-up trucks, 6% had greenhouses, 10% obtained feed, 2% received tractors while 2% had horticultural equipment.
·      10% of farmers are satisfied with the MOAs facilities but 90% are not.
·      20% of those participating are not satisfied with cow rearing, 80% are.


At the moment 100% of animal management, husbandry, housing producing milk and milk processing are in a primitive, unhealthy and nonscientific condition. This indicates that farmers are in urgent need of an extension system.


The extension center situation in Kurdistan


Extension office activity of a center was taken as a sample for the 2011 fiscal year, and covered 154 village including 3,466 farmers. The survey results were:


Both Sulaiymaniyah and Erbil agriculture college/ animal resource faculties were asked about question that already had been answered by the participating farmers above:


There were no great differences between answers including;
·      Have few animals;  in Sulaimaniyah there are 5 cows, 2 bulls, 4 calves, and 8 cows, 2 bulls, 4 calves.
·      They have no information about their calf F. generation
·      They have only one breed of cows; Holstein X local cow cross breeds.
·      They use natural mating for their cows, which has no reasonable cause at all in modern dairy practice.
·      They fed their cow clover but they do not measure out feeds just as farmers surveyed do not.
·      In Erbil college no vitamin supplements at all are given in the feed, while in Sulaiymaniyah .college 0.02 ratio of vitamins is given when the advised normal ratio is 1%
·      Calves in Erbil are weaned at 3months of age while in Sulaimaniyah they are weaned at 3-4 months.
·      Calves suckle milk directly.
·      Milking of pregnant cows is stopped at 1-2 months before parturition by reducing the amount of milking and without changing the pregnant cow’s feed.


Livestock industry conditions are totally primitive and are the main cause of low milk production. Even cow management in scientific centers is not scientific! Allowing natural mating for cows in scientific centers has no reasonable cause at all and extension system as a part of MOA&WR animal management promotion policy is very weak with a lack of attention given to agriculture. The total agricultural investment in Kurdistan was less than 2% .*