Email ThisBlogThis!Share to TwitterShare to FacebookShare to Pinterest
Labels:photos LIVESTOCK


A disease which has caused birth defects and miscarriages in livestock has been found on 74 farms in England.

The Schmallenberg infection has been diagnosed five times in cattle and 69 times in sheep, Defra, The Department for Environment, Food and Rural Affairs ,UK officials said.

But the National Farmers' Union warned cases of the virus, which first emerged in the Netherlands and Germany last year, were being "under-reported".

In England, the disease has now been identified on the Isle of Wight and in Wiltshire, West Berkshire and Gloucestershire.

This is in addition to farms in Norfolk, Suffolk, Essex, Kent, East and West Sussex, Hertfordshire, Surrey, Hampshire and Cornwall, which have previously identified cases.

The Department for Environment, Food and Rural Affairs said it suspected livestock may have got the virus from infected midges blown across the Channel from affected areas in Europe.

None of the affected farms have imported animals during 2011 from the affected areas in mainland Europe.
The impact of the disease on the UK sheep flock should become clear over the next two weeks as the lambing season reaches its peak.
The UK's chief veterinary officer, Nigel Gibbens, said farmers and vets had been "very good about reporting the disease".
Defra had received 150 reports of the virus but only 74 of those had proven positive, he said.
"Farmers are rightly concerned but no there is no panic at all," he told the BBC News Channel.

• Can lead to late abortions and birth deformities in newborn sheep, goats and cattle
• It has also caused "mild to moderate" symptoms in adult cattle
• These include reduced milk yield and diarrhoea
• Spread by midges
• First emerged in the Netherlands and Germany in 2011
• Virus named after the German town where it was first seen
• Farms in southern and eastern England reported the virus being present in January 2012
• UK livestock possibly infected by midges blown across the English Channel from mainland Europe

• What is Schmallenberg virus?

Peter Kendall, president the NFU, told the BBC News Channel that some farms had reported losses of up to a quarter of their lambs.
East Sussex farmer Frank Langrish, an NFU spokesman, warned there was "huge under-reporting" of cases of the virus. "We had a meeting last week about the virus and all the farmers there had seen cases but only about one in five had actually bothered to report it," he said."The number of cases the Animal Health and Veterinary Laboratories Agency (is reporting) are way under what is happening on the ground."
Ian Johnson, spokesman for the south-west England branch of the National Farmers' Union, said farmers were worried about the disease."Nobody knows much about the virus and nobody knows the extent to which it may have spread," he said. "That will manifest at peak lambing time in March and April."
He said the risk should be kept in context - last year in south-west England 25,000 cattle had to be slaughtered because of Bovine TB, he said, while so far less than 100 cases of Schmallenberg have been reported.

'Slowly creeping'
But he added "the problem is, it's an unknown", and went on: "Potentially, it could be extremely serious depending on how widespread it is."

Mr Johnson urged farmers who suspect their livestock might be affected to report it despite the virus not being classified as a "notifiable disease"."We need to keep farmers aware and keep them reporting it so that we can see the extent of it," he said.

David Willison, who keeps sheep and Jersey cattle at Cinderbarrow Farm in Cumbria, told BBC Radio 4's Farming Today programme he was concerned about the virus and was waiting to see what would happen, despite his farm being in north-west England, far from the farms where the virus has been reported. He said the fact that the disease was new made it difficult to predict its spread, adding that the latest information suggested the virus was "slowly creeping" further north in the country.

Phil Stocker, chief executive of the National Sheep Association, said there was currently no compensation for farmers whose animals suffer from the disease.

Since it was a relatively new affliction, they would not be insured against it, making it a "direct hit" on the farmer's pocket, he said. David Willison, farmer

The easiest way of telling if you've got it is if you start getting defected lambs - one with bad joints or stillborn, sheep off colour. If you saw them you would have to ring the relevant department and report it.  It is very difficult to do a lot when everybody is learning. There are no guidelines to work with based on what has been done in previous events.

Everybody just has just got to do what they can. It's the not knowing. It's the waiting and wondering. And if you find a lamb that is deformed you would be wondering whether the disease has come or not.
Like any animal, you do get deformities - odd problems - a small percentage of time so you would also be looking to see if it was something you had seen before or something new.

Mr Stocker said that if livestock numbers fell steeply, the dynamics of supply and demand could mean that the price of lamb could rise for shoppers.

A Defra spokesman said: "As everyone connected with the livestock industry has been expecting, the number of cases of Schmallenberg has increased as lambing and calving begin to gather pace.

"As farmers, vets, and governments continue to gather information about the progress and effects of this disease, it's vital that farmers continue to report any suspicions they have as soon as possible.

"The European Centre for Disease Prevention and Control says it is unlikely Schmallenberg virus would cause disease in humans."

Professor Peter Mertens, of the Institute for Animal Health, said the production of a vaccine to combat the disease was "a couple of years away" if normal rules were followed.

"But there are shortcuts which wouldn't reduce the safety of a vaccine but would allow a vaccine to come to the market in perhaps six months, without rigorously checking that it achieved all of the efficacy milestones that perhaps would be normally needed," he told the BBC News Channel. 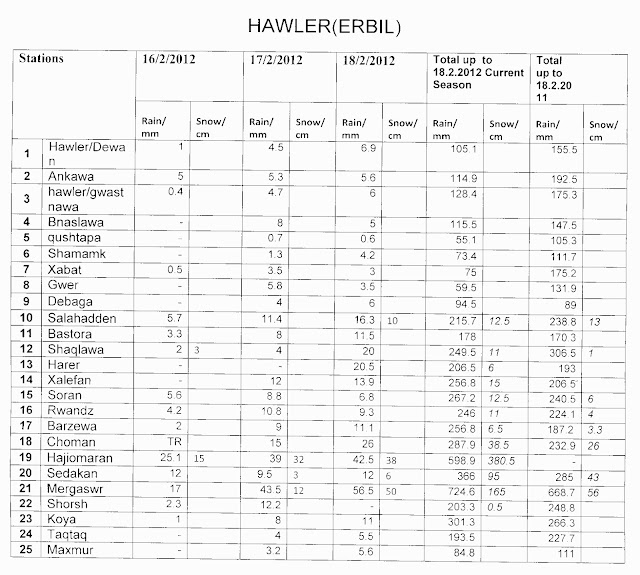 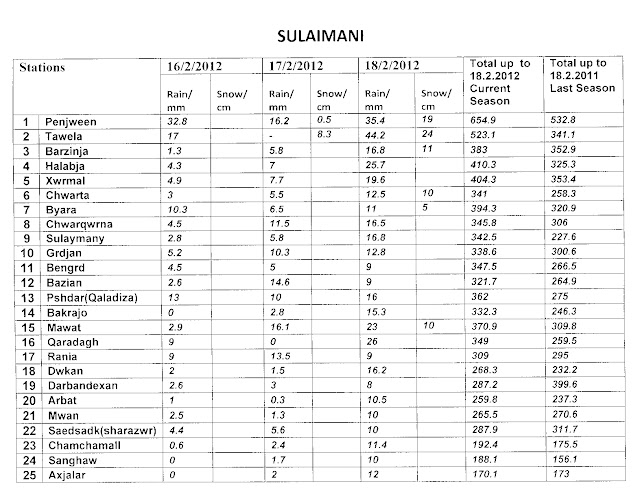 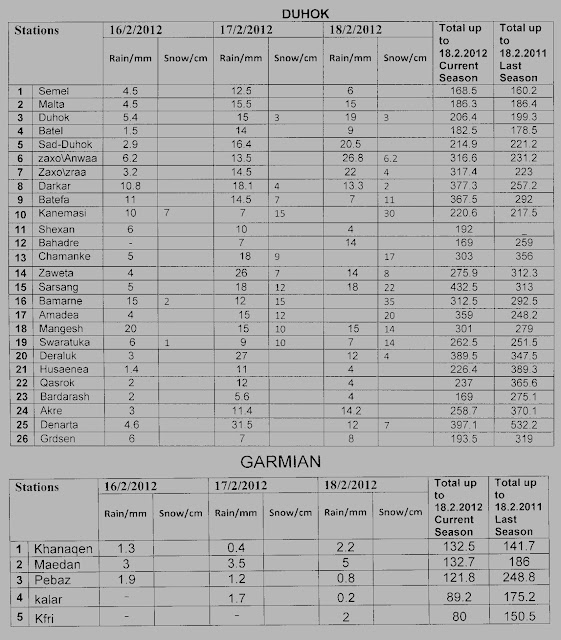 Posted by Talib Elam at Wednesday, February 22, 2012 No comments:

KURDISTAN’s SOYABEAN PRODUCTION TAKES A MAJOR STEP FORWARDزراعة الصويا
Here is a picture of the first of 5 soyabean planters being loading on to a container to be sent to Kurdistan.
Hopefully, this equipment will plant 1000's of Donums of soyabeans in Kurdistan. This is a very exciting time for all those who are working towards revitalizing our agriculture. Soya is an important element in achieving our goal of some degree of food security in Kurdistan, and indeed in Iraq as a whole.


I applaud Dr Salah Bakir , Karwan and SALT International for their continued commitment, which they have maintained against all the odds. A most welcome start  to 2012. 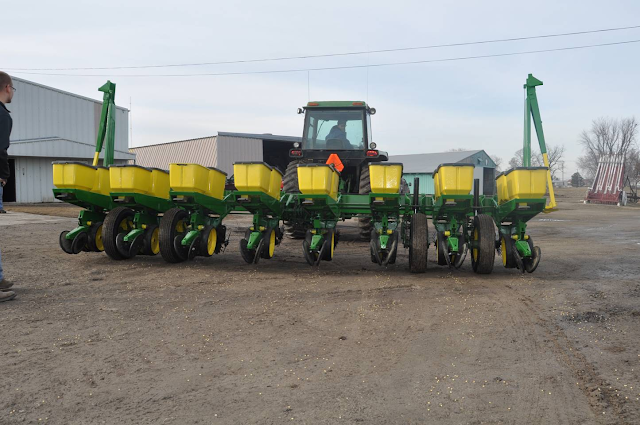 Below are tables showing the recorded rainfall (and  snow) in Kurdistan during this season2012-2011) ).The records are up to February 1st, 2012 and the rainfall, for the same period last year(2010-2011) is also shown. Each of the 81stations in the region are named allowing comparison of the rainfall in each named area. 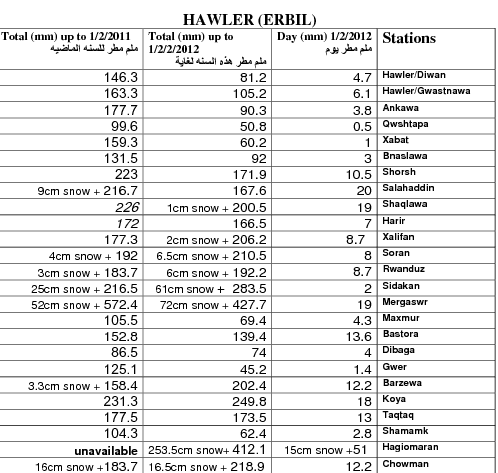 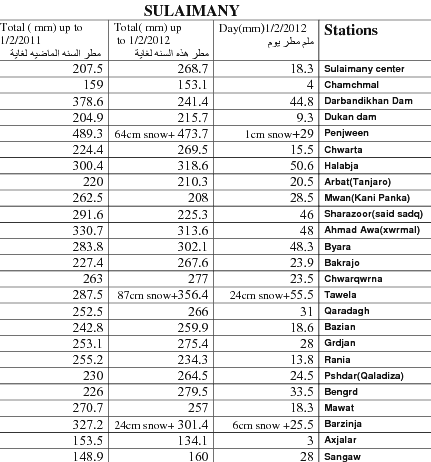 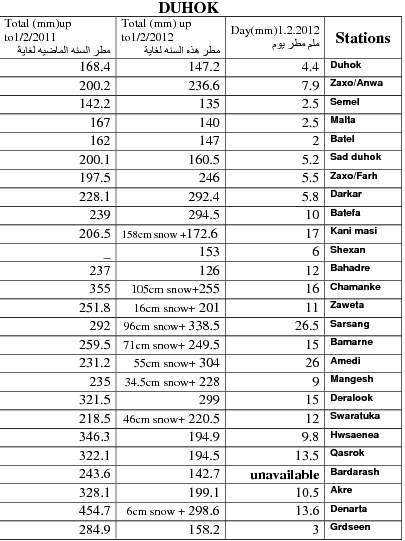