It is well known that the Kurdistan  Regional Government (KRG) receives 17% of the total budget for Iraq as a whole and that the country’s budget is derived from oil revenues. The KRG uses the money it receives to pay the salaries of its staff, totaling around 1,000,000 individuals employed at all levels, but for the last two months, as a result of dispute over oil revenues and other dispute in the Iraqi Parliament, the KRG has not received any money from Baghdad so that it has not been able to pay its staff salaries and many families are now facing hardship.

As the families of the KRG staff suffer the consequences of this dispute the media in Kurdistan have pounced on the story and each newspaper and television station has expressed its view on the current situation. In the absence of an official state media the numerous press, radio and television studios that are supported by political parties, groups or indeed individuals have been airing their views, some of which have been very irresponsible in the current situation. A story that has unfortunately gained notice states that, in response to the failure of Baghdad to release funds to the KRG, water flowing into central Iraq from Kurdistan will be cut off!

When I heard of this threat to cut the water supply I immediately went to see the KRG’s official spokesman who assured me that there was no truth in this story and he was very angry that such a story existed. However the media were by then having a field day with the idea and naturally it has come to the attention of Baghdad. The result has been that two prominent MPs ( Mahmood El-Hassan & Alia Nsaif)  from the Prime Minister’s party have openly stated that if the water supply to the south is cut the army should be sent into Kurdistan to put a stop to it!.  Firstly I could not believe that the idea of depriving the south of water had been given any credence but secondly I was appalled to think that there were those in power in central government who would immediately send the army into Kurdistan. How I wish that those in government had been so ready to act when Iran stopped 23 rivers flowing in to Iraq or when Turkey reduced the waters of the Tigris and as they are now doing to the Euphrates.

On this website we endeavour to be transparent in everything we do and the tables below show the amount of rain recorded at 77 weather stations throughout the three governorates of Kurdistan. The results show that as of last week the amount of rain falling in Kurdistan this season has been 40% less than that recorded in the same time last year. Quite simply we are, like the rest of the Middle East region this year, facing the possibility of drought. We have had rain today but it has not been sufficient to alter the threat of drought and the strong possibility that this coming summer both the north and south will face a lack of water.

We should not reduce ourselves to being like our neighbours in Turkey and Iran where water is a commodity that can be used to threaten others. 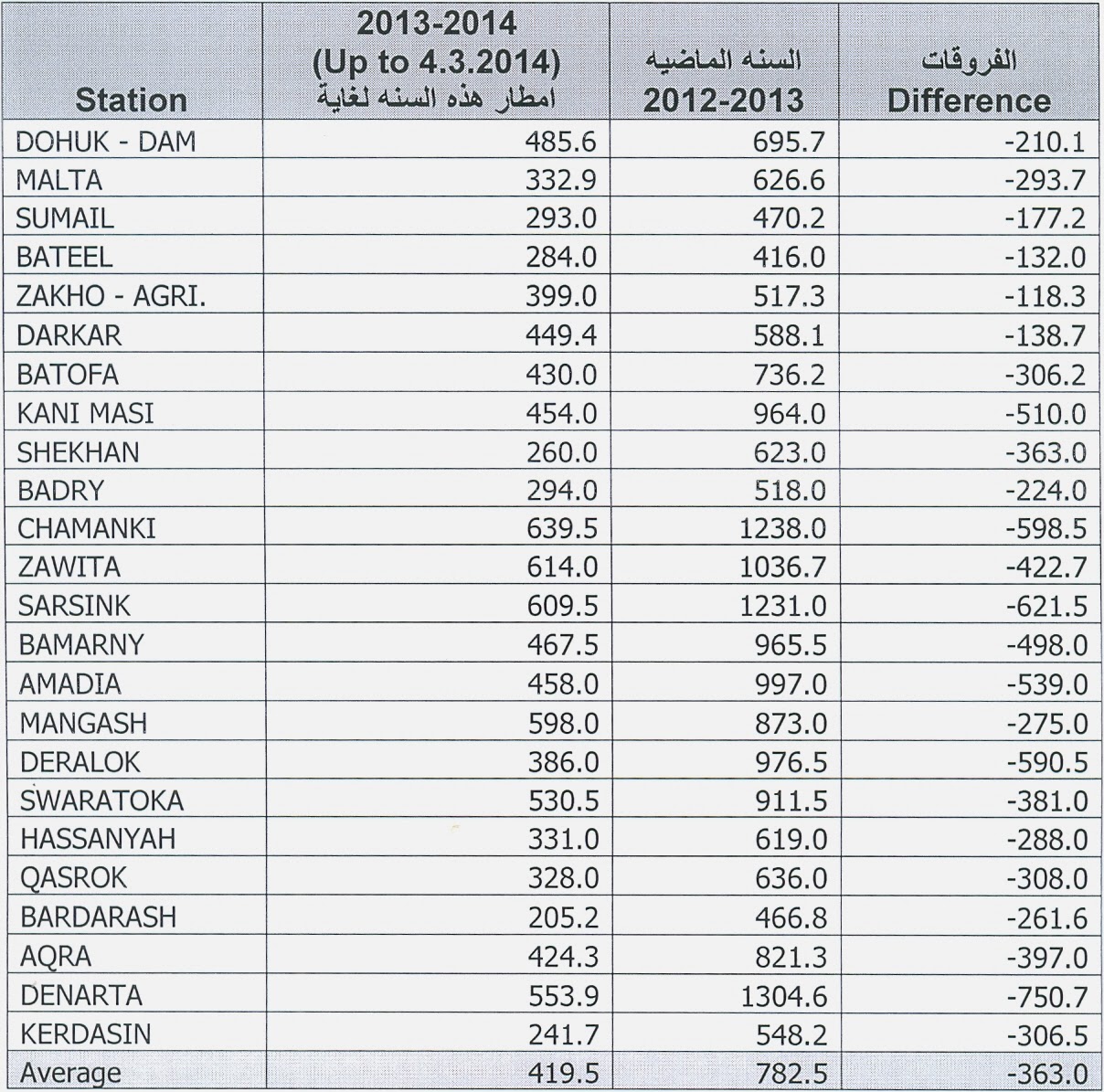 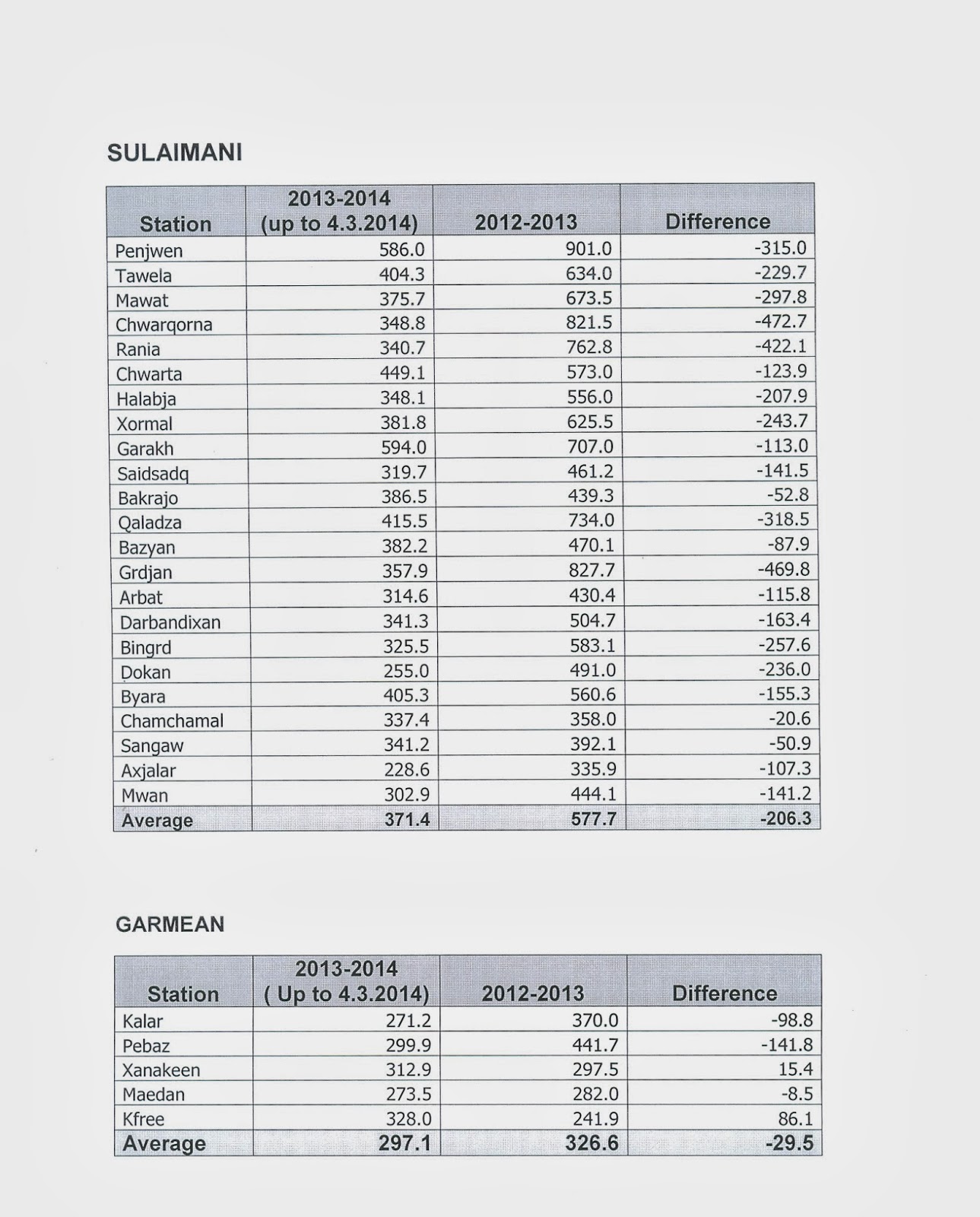 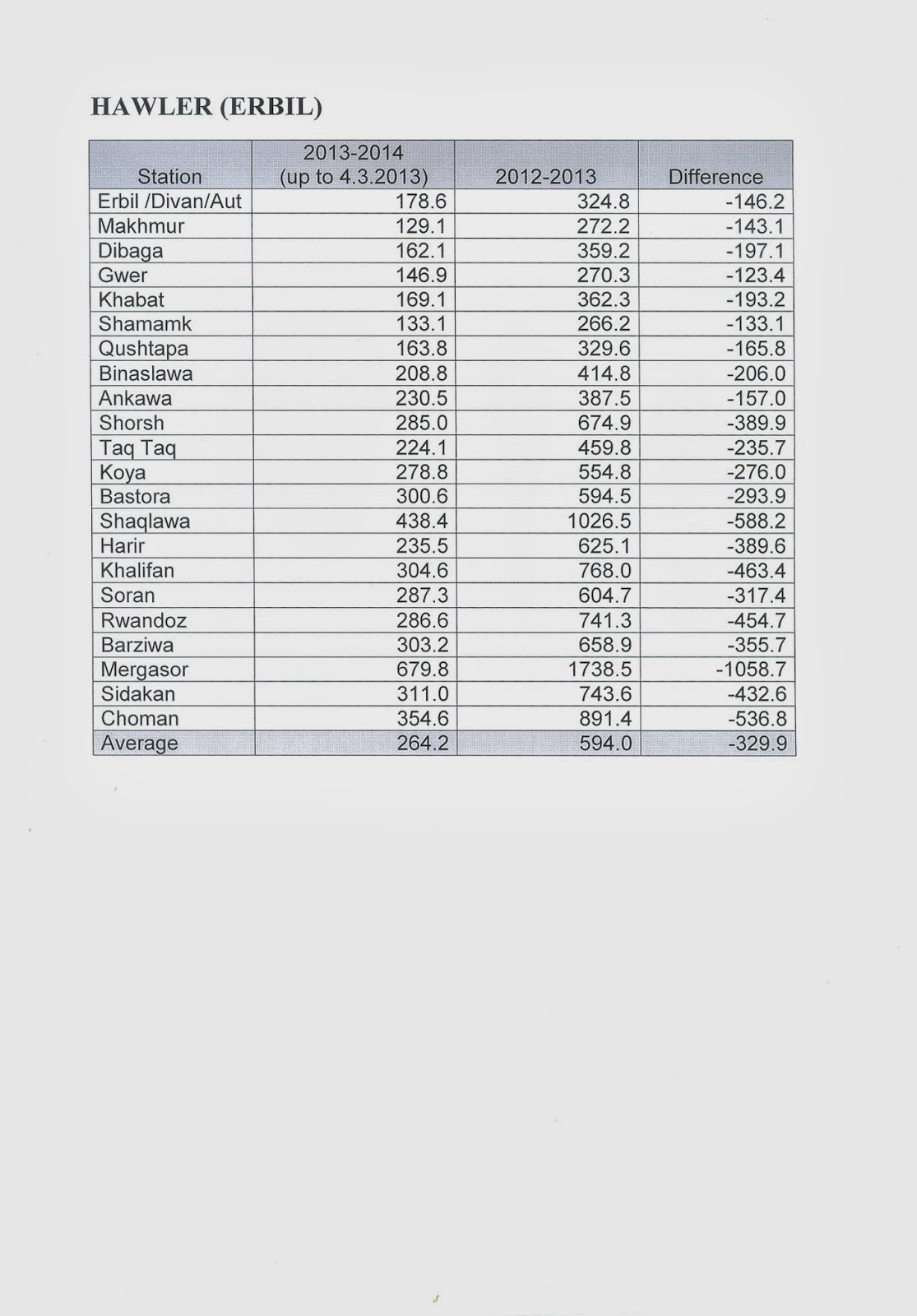