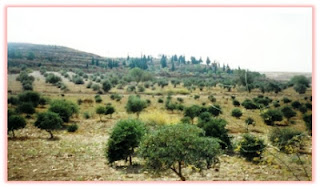 Jojoba, pronounced ho-ho-ba, is Simmondsia chinensis, a xerophyte, woody, and perennial evergreen shrub native to the northern Mexico and southwestern Arizona and California in the Sonoran Desert. Jojoba belongs to the family Simmondsiaceae. The plant can grow up to 5-meters in height with leathery blue-green leaves about 2.5-cm in length.  Female jojoba plants produce oval fruits that open at maturity releasing 1-3 brown, peanut-sized seeds.  The plant can live up to 200-years.  Jojoba plants grow well in coarse textured soils of marginal fertility due mainly to their deep roots. Jojoba plants need less than one half the amount of water required by olive trees.  Natural jojoba populations grow in areas receiving 76-450-mm of rain annually depending on soil relief (topography) that affects water runoff. The best jojoba plants observed, 5-m in height, were in areas with 254-380-mm of annual precipitation.  Jojoba is tolerant to salinity, to drought, withstands hot summers, and is a low labor intensive crop.


The Need for Finding a Substitute for Sperm Whale Oil: 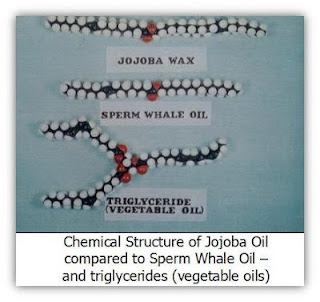 When the Sperm Whale was listed as endangered species, the US and other industrial countries looked for alternative sources of its wax due to its indispensable uses and applications.   Synthetic substitutes are difficult to produce, therefore, investigations focused on natural sources.  The Orange Roughy fish makes similar oil, but it has been overharvested, thus, it could not be relied on as a long term solution. With the enactment of the Endangered Species Act for Sperm Whale, jojoba received serious attention in USA in the early 1970’s.  Jojoba seeds contain about 50% by mass of a light golden-colored liquid-wax similar in chemical composition to the Sperm Whale oil, and it turned out to be a perfect substitute for the liquid-wax of the Sperm Whale.


Jojoba Cultivation:
Irrigation systems are necessary to begin with jojoba plantations whether by planting seeds or seedlings.  The plants seem to do well after two years of intensive watering in early winter and spring when jojoba plants use water efficiently for optimum growth. This watering period is very suitable for farmers, as jojoba water needs will not conflict with the watering requirement of traditional crops. Under optimum conditions of soil, water, sunlight; the tap root will grow 2.5-cm a day, and within two years (about 9.0-m) the roots should reach the underground water level to enable sufficient growth for seed production without supplemental irrigation. Since, new flowers develop in late summer, hence, midsummer irrigation in very dry years would be beneficial for good flower production and good seed yield.  Jojoba generally does not produce an economical yield until the fourth or fifth year after planting.
At maturity a single plant can yield as much as 5-kg of seeds.  A yield of 3500-kg per hectare (3000-pounds per acre) appears to be a realistic expectation from 9-10 year old plantation.
Temperature may be the most critical factor in growing jojoba. Flowers and terminal portions of branches of most jojoba plants would be damaged by frost when atmospheric temperatures reach -5 to -6 ᴼC.
Jojoba shrubs with proper pruning can form trees just like olive trees with rows of trees spaced at 3-m apart for mechanized cultivation, weeding, and other operations. In Palestine such practices are adopted and jojoba plantations appear very much like olive orchards.
Propagation:
Jojoba can be propagated by seeds, rooted cuttings, and tissue cultures.  Single plant variability in seed size, yield, morphology, and wax content is striking both within and among natural populations. However, wax composition is extremely uniform throughout the area of its adaptation which seems to depend on its genetic makeup and not on other variations. The plants are dioecious, that is there are male and female plants.   It is not possible to distinguish female plants from the male plants of jojoba before flowering. In order to maximize production, it would be useful to plant rooted cuttings from sexed plants that are known to be high producers or to have seeds with high oil content. Rooting the cuttings requires some technical knowhow, but it would be worthwhile to have a plantation with 90% to 95% female plants and 10% to 5% male plants respectively to produce enough pollen to fertilize all the female flowers.
Jojoba is currently grown as an industrial crop in USA, Argentina, Australia, Mexico, India, Israel, Jordan, Pakistan, and Palestine.
Various Uses of Jojoba Oil: 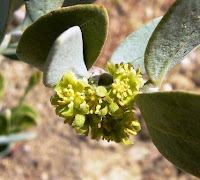 Currently there are numerous uses for jojoba oil.  They include cosmetics, lubricants for delicate equipment such as watches, artificial hearts, but also for motors and transmissions.  Moreover, it is used as a low calorie cooking oil that does not rancid, antifoaming agents in fermentation processes, candle wax, polishes, coating of fruits and pills, insulations for batteries and wires, varnishes and paints, detergents, plastics and resins, leather softener, transformer coolant, and more.
Jojoba oil has special and unique uses for treatment of human skin diseases and cosmetic uses such as shampoos and creams for beautification of hair and face, and prevention of facial and neck wrinkles. Jojoba oil is similar to the sebum oil produced by human skin and is absorbed by human skin in few seconds without leaving any residue. Moreover, jojoba oil use for cosmetics is superior and distinctive over other plant seed oils, animal fats, and many synthetic chemicalss which are added to cosmetics for their marketing purposes.  And there is a justified trend worldwide for preference of natural products because of the concern over introducing carcenogens to humans by synthetic chemicals.

About 50-ml of jojoba oil( boiling point 390 ᵒC) per liter of automoible motor oil or transmission oil is used to extend the period for car oil use to 20,000-km of driving before it has to be changed because of the high boiling poit of jojoba oil.  Therefore, with the growing demand for  huge amounts of jojoba oil for lubrication industry, especially for automobiles and airoplanes, even if vast areas of lands were planted with jojoba in various parts of the world, the oil produced will not be enough to meet the demands of all industrial uses.
Chemical Composition:
Jojoba oil is a unique liquid-wax similar in composition to the Sperm Whale oil.  Chemically, jojoba esters are a complex mixture of long chain unsaturated fatty acids and unsaturated fatty alcohols each chain made up of 20-21-carbon atoms joined by an ester bond to form linear chains of 42-carbon atoms, thus, the fatty acids in jojoba wax are not 16-18-carbon atoms as is the case with fatty acids commonly found in triglycerides of other plant seeds oils (Figure 1).
The Prospects of Jojoba Crop Cultivation in Iraq:
With this background about jojoba as a commercial crop grown in arid regions for production of its seeds that contain about 50% by mass of a unique oil which is acually a liquid-wax that has numerous cosmetic, medical, and industrial applications.  It is a perfect substitute for the oil(wax) of Sperm Whale, the endangered species.
Therefore, the prospects for success of jojoba plantations in Iraq are high considering the climatic conditions and widespread coarse textured soils with marginal fertility.  Such prospects exist especially on the slopes of Kurdistan hills and mountains where the annual rainfall is ≥ 250-mm, the temperatures seldom reach -3 ᴼC,  and where natural vegetation of trees and shrubs is scarce or scattered.  jojoba evergreen plants beside adding beautiful scenery to the landscape, they also can stablize soils against serious erosions in addion to their valuable seed products.
References
1.  http://en.wikipedia.org/wiki/jojoba_ester
2.  http://faculty.ucc.edu/biology-ombrello/POW/jojoba.htm
3.  http://jojbassaf.com/jojba_oil.php
4.  Tremper, Gary. 1996  . The history and promise of jojoba.  Armchair World,
www.armchair.com
5.   http://www.buzzle.com/articles/uses-of-jojoba--jojoba-oil-benefits.html