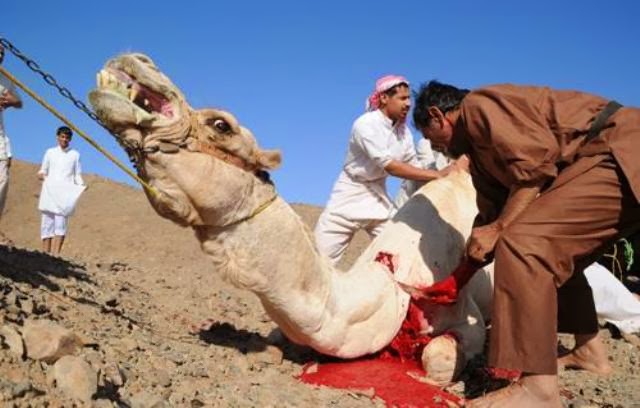 16th,October 2013
This very old male camel was slaughtered inhumanely in Saudi yesterday in celebration of the Islamic Eid. Who was going to eat the tough meat of this poor animal while, freely available throughout the Kingdom during the Eid, is an abundancy of fresh meat from the millions of small ruminants slaughtered during the festival!
Yesterday the Islamic Development Bank sold 800,000 head of  highly subsidized small ruminants for almost $100,000,000 in order for pilgrims to sacrifice them. In addition the Saudi newspapers today have reported that some 30 ‘ghost’ companies were operating to provide pilgrims with certificates of proof of slaughter of a sacrificial animal as part of their Haj when in fact no animals were killed.
My conservative estimate is that throughout the Islamic countries over 8,000,000 animals were slaughtered yesterday in the first few hours of the Eid. This mass slaughter has a devastating effect on livestock production in our arid regions where there is insufficient off-take numbers of animals produced and this, in turn, leads to mass legal and illegal movements of livestock across international borders.
While the transboundary movement of animals is always occurring during the run up to the Eid it becomes excessive and widespread. In addition the devaluation of currencies, as seen now in Syria and Iran and previously in Somalia, Afghanistan and Iraq, leads to a rise in transboundary movement of all livestock. In turn the rise in livestock movements results in a corresponding rise in Transboundary Animal Diseases (TADs) and in recent weeks outbreaks of Lumpy Skin Disease have been recorded throughout the countries of our Region because of the increased livestock smuggling.
Just on three years ago FAO and OIE announced the welcome news that cattle plague (rinderpest) had been eradicated worldwide nevertheless when cattle can be smuggled across four countries (personal observation) we must remain ever vigilant.
Posted by Talib Elam at Thursday, October 17, 2013